With its slight licorice flavor, Jiaogulan infusion is particularly valued for the adaptogenic effect of this plant as well as for its powerful antioxidant action.

11.00 €
Sorry but this combination does not exist.

Prepared from the leaves and stems of the plant, the infusion of Jiaogulan can be consumed at any time of the day because it does not contain theine.

This plant has been drunk as an infusion or incorporated into food for centuries in Southeast Asia to get from its antioxidant benefits, its adaptogenic properties & its relaxing effect.

The Jiaogulan, in short

It may be a surprise for your entourage but yes, Jiaogulan, from its scientific name Gynostemma pentaphyllum is part of the cucurbit family.

From the borders of Oolong tea plantations, our Jiaogulan is GMO-free, cultivated, harvested, sorted & hand-conditioned on the heights of Chiang Rai in Thailand. Like all of the products in the Lemon Import catalog, it has not been treated in any way at any stage : no pesticides or industrial fertilizers. However, it does not carry an organic label because it has not been certified organic within the meaning of the European specifications. This approach is currently out of reach for small entities such as our producers and ourselves. In Thailand, this plant is sometimes called Panjakun, but it is also found under other names : Miracle Grass, herb of immortality or Southern Ginseng.

At first glance, nothing indicates the slightest link between the two plants. What brings them together, however, is the presence of gypenosides in the aerial parts of Jiaogulan & ginsenosides in the root of Asian Ginseng. To locate them, both are part of saponin glycosides (molecules produced naturally by plants such as soy, garlic or quinoa to protect against microbial and fungal attacks). What is remarkable is to find similar substances in Ginseng Panax & in Jiaogulan, a perennial plant clearly less difficult to cultivate and much more productive. As Christophe Bernard, herbalist at Althea Provence explains (see his video in the More tab), Ginseng & Jiaogulan are much more than a list of ginsenosides & gypenosides. From there to assert that both have the same properties of boosting immunity, concentration & intellectual capacities, the studies available at present do not decide it but they have attracted attention researchers on Jiaogulan. It was the adaptogenic nature of this plant that first distinguished it.

There are different definitions of the term adaptogen, some of which warrant caution as they make you dream. According to toxicologist Lazarev, an adaptogenic substance exerts a non-specific normalizing action on many organs or physiological functions. Thus, it has a remarkable regulatory function by increasing the adaptability and resilience of the organism with regard to stress, whether psychological, biological, chemical or physical : in case of too high a level weak, it helps the body to assimilate what to approach the normal balance while it does the opposite in case of too high level. Incredible, right ?

Let us also remember that if the notion of adaptogen is recent in scientific publications (see the study of Lazarev, 1947 or Brekhman & Dardymov, 1970), it crosses the approach of traditional Asian medicines for thousands of years by providing its support to a good general state of health.

As regards Jiaogulan, its adaptogenic action concerns not only vitality or blood pressure but also the immune system or LDL cholesterol level. In this line, Christophe Bernard evokes 2 benefits of taking Jiaogulan which seem important to us: the prevention of immunosuppression caused by chemotherapy or radiotherapy. The benefit for patients with leukopenia, that is, those who do not have enough white blood cells. On the subject of immunosuppression, a Chinese study dated 2016 reveals that the gypenoside content of Jiaogulan (saponins, sterols, flavonoids & polysaccharides) improves the immune response of patients after chemotherapy or radiotherapy, by its regulatory action. metabolism, antiproliferative & its anxiolytic activity. It also describes an effect against the development of different cancers, again linked to the adaptogenic properties of this plant.

Its antioxidant action is particularly significant since taking Jiaogulan increases the production of superoxide dismutases. These enzymes are essential for preserving the metabolic balance towards which any cell exposed to oxygen or its derivatives tends. When the antixoydants are lacking, the cell enters into oxidative stress, which weakens it, increases the risk of mutation & accelerates aging. On the other hand, a good level of superoxide dismutase helps the body to fight against free radicals which result from cellular oxidation.

A last study conducted in Vietnam reveals that Jiaogulan has an anti-diabetes effect, but also that taking Jiaogulan significantly increases insulin sensitivity for people with type 2 diabetes. In addition, this study was able to put evidence that Jiaogulan helped reduce hypergliycemia & hyperlipidemia.

We could also cite the benefits of the Jiaogulan infusion, especially in relation to cognitive & cerebral capacities but also from the point of view of cardiac functions & blood flow. Note here that all these allegations are listed here for informational purposes only and do not exempt from referring to the opinion of a health professional.

Each will adapt its dosage, but as a benchmark, a tablespoon of dry leaves for about 1 liter of water in hot infusion is more than enough and allows 2 to 3 reinfusions. In our opinion, if you want to spice up the taste, it is better to play on the duration of the infusion rather than adding dry leaves (see the Marks tab).

After the hot infusion, let yourself be tempted by a good iced Jiaogulan: place the leaves already infused in a mug of cold water, and put everything in the fridge for a few hours. To be enjoyed in the hot season, served with a few ice cubes…

Consult the Marks tab for our dosage advice because it is a plant with a powerful taste!

To choose the desired packaging size from the available formats, use the selector at the top of the page.

Please use the "Packing" dropdown list on the top of page to choose the desired packing.

See also in our range :

The pocket herbal inhaler with plants : a simple, natural & practical ally to avoid getting sick by stimulating his immunity.

The pocket herbal inhaler : a simple, natural & handy ally to avoid getting sick.

A world tour by bicycle, a source of inspiration to create Lemon Import.

Recommended quantity for a 600ml pot : 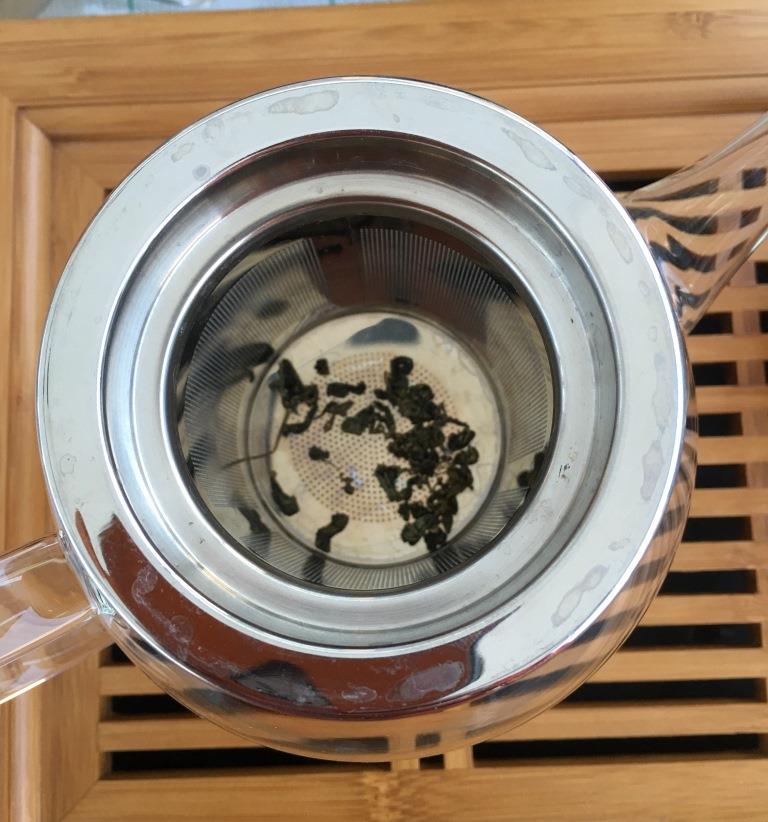 Enjoy also your Jiaogulan instant with the view by using our Tisanière with deep filter.

With its scientific name Gynostemma pentaphyllum, Jiaogulan belongs to cucurbit family. Its natural habitat stretches mainly on highlands & mountainous countries of south-east of Asia & south China. People living in such remote areas are said to live longer than others due to this plant consumption. That's why they are calling it "herb of immortality".

Let's keep in mind here that this plant is said as adaptive, and consequently, it may be a organism regulator in case of excess or insufficiency.

And, last but not least, after having enjoyed Jiaogulan herbal tea, try to use loose leaves & stems to strengthen a salad or to flavor a baked meal… You may also brew them a 2nd, then a 3rd time.